When looking at railroad tracks that go off in the distance, everyone understands that they get closer and closer together until they finally disappear. The spot at which they disappear is called, appropriately enough, the vanishing point. 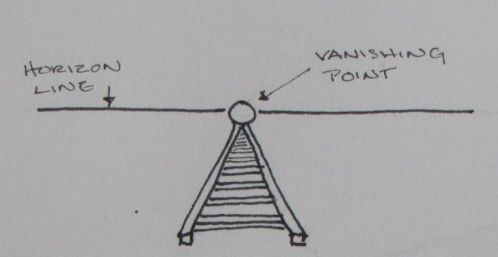 To understand the significance of the vanishing point, let’s talk a bit a about parallel lines. Looking at railroad tracks, everyone knows they’re parallel. No one questions that they get smaller and smaller and actually look like they come together at the spot where they disappear. The basic truism of perspective is that all parallel lines appear to get closer together as they recede in the distance. By establishing the vanishing point, we can figure out how to draw those parallel lines.

The trick is establishing the vanishing point. How do we do that? By first determining  the horizon line, then the point where one parallel line intersects it.

OK, so what about the other side of the building? Yes, those lines go off to a vanishing point too. However in this instance, that vanishing point happens to be far off the paper. Admittedly, that’s a little tricky, but one can approximate and tell if a line is wrong. Can you tell which lines I purposely drew incorrectly. Hint: it is not the vertical lines.

Have perspective questions?  Feel free to use the comment box and ask about them.