In honor of Halloween, I’m going to draw some pumpkins.  Recently I joined some friends to draw and paint at a local pumpkin patch.  I had no idea there were so many different kinds of pumpkins.   I especially loved the gray ones and those that had unusual shapes.

I was reminded of a student who questioned me about my use of vertical lines to draw round objects.  He understood how I could draw buildings, “But,” he said, “How could you draw a pumpkin?”    “Like this,” I said.   Then I proceeded to do a five minute  drawing of an imaginary pumpkin using only straight (fairly straight) vertical lines. 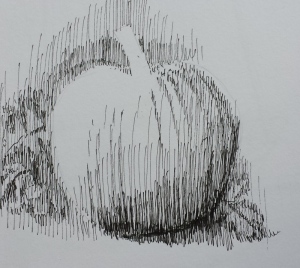 Watch for yourself as I tackle a group of pumpkins from the pumpkin patch.  I start out with a light pencil sketch placing each of the pumpkins on the pile.  Then I literally start in the front and move around the pile drawing each one.  I put in a few outlines for definition, but most of the drawing is vertical lines that define value.

It took about an hour to work my way around the pumpkin pile.  It’s a simple drawing, but looking closely you can see how the proximity of the lines defines the shape of each pumpkin.  I used an 01 Micron pen on sketchbook paper.  I wish I would have used watercolor paper.  These pumpkins were not the usual orange, but a deep reddish color and I can’t help but think  a bit of watercolor would add to the drawing.