In the Northwest there are hills and mountains galore.  I love seeing the layers of light as I hike or drive through them.  Have you ever noticed how the distant hills appear paler and grayer as they recede in the distance?  Not only is it a captivating effect, it’s the next technique I’m going to describe in our discussion of depth.  It’s called atmospheric, or sometimes, aerial perspective.  I prefer to use the term atmospheric because 1) it’s caused by the atmosphere and 2) I don’t want to confuse it with aerial viewpoint – which will be discussed in a later blog.

Atmospheric Perspective is an optics phenomenon wherein molecules of the air together with larger particles in the atmosphere, such as water vapor and smoke, add light from the sky onto the light from the object, reducing its contrast with the background sky light.  Not only do objects become lighter and grayer, they also become less distinct.  Conversely, objects that are close retain sharp contrast and their full spectrum of color.  Of course in drawing, we’re not as concerned with color so much, but this is always good to know.

As an example of atmospheric perspective, here’s a simple pencil sketch.  The flower is close, detailed and sharply contrasted.  As the field recedes the details diminish until there’s only a few lines to indicate flowers.  The trees in the distance have almost no contrast at all. 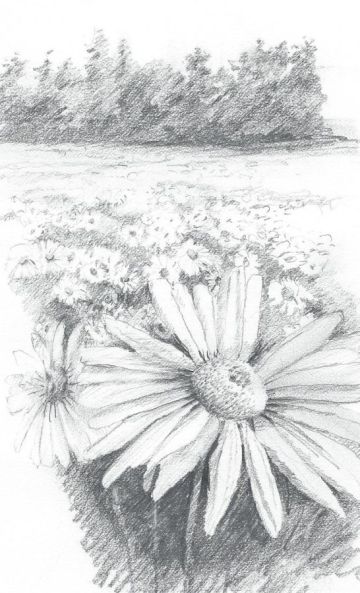 It’s quite easy to represent diminishing values with pencil, but how would you do it with ink?  It’s simple really:  draw fewer lines with less contrast.   Watch while I do the same field of flowers with a Micron pen.

I added some distant hills to increase the distance even more.  The finished drawing ended up like this: 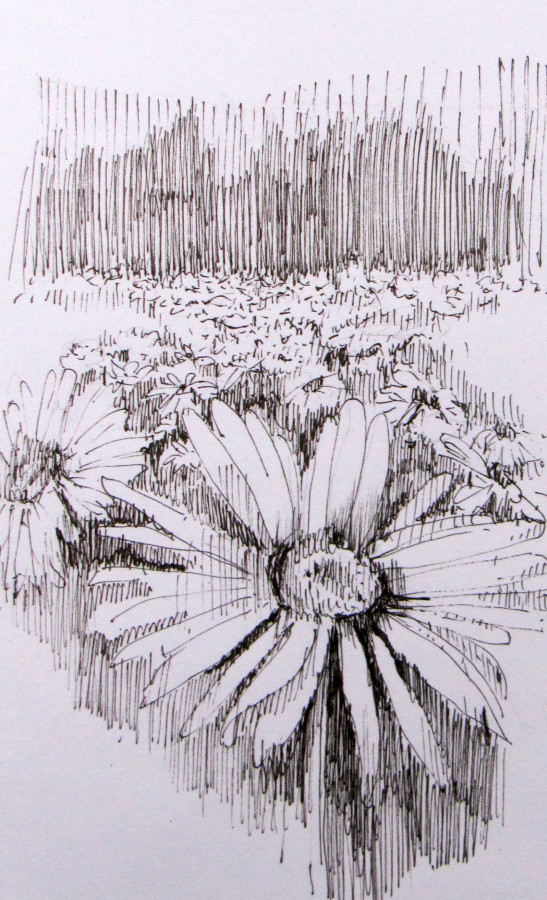 Of course you don’t have to draw a landscape representing miles and miles of terrain to use this principle.  Even for an arrangement close at hand, the farthest objects can be rendered more simply, while those in front can be sharp and distinct.  One interesting thing to note:  if the background is dark, the farthest objects get darker, not lighter, as they would if the sky was your only backdrop.

Take a look at the apples I did last week.  See how the apples in the back are slightly less defined.  On the gallery page I posted a new drawing that shows the simplicity of distant landforms.

Next week, the most important depth technique of all.  Do you know what it is?