Last week I posted a very simple drawing with some major composition flaws.  There are any number of ways to improve problems such as these.  Here again is the “wrong” picture, 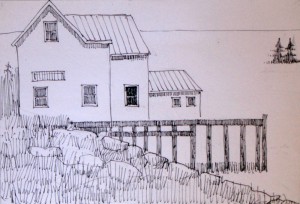 and a review of what I purposely drew wrong and how I corrected it,  The “right” picture is at the bottom – and a color enhanced version in the gallery.

– I moved the building down so that the roof peak wouldn’t end on the edge of the paper.

– On the “wrong” version, the pilings are evenly spaced – boring! – not to mention the fact that they don’t indicate the depth of the dock.    The improved version has a much more interesting arrangement of shapes and creates a sense of space.

– The island in the background has two Mike and Ike trees.  It’s floating in space and is unconnected to the rest of the picture.  I made the shape of the island less defined and added a bit of land beyond that which ties the elements of the drawing together.

– In the foreground, the line of the rocks is regular and makes a beeline for the bottom right corner moving your eye straight off the page.   Drawing the rocks at a different angle is a big improvement.  Adding a bit of shading to define the shapes helps too.

-Also in the foreground, instead of evenly spaced lines for grasses and ground cover, I varied the values and form.  This not only is more interesting, it’s more natural.

The changes I made are not huge, but all together, they make a much more harmonious drawing. 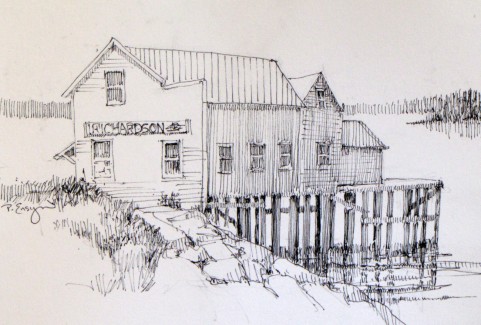